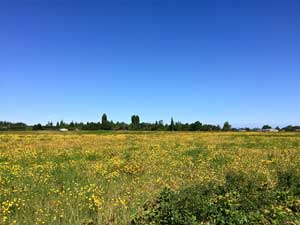 Based in Sequim, Washington, Westerra Homes has decades of experience as a custom home and neighborhood developer.  Even though the city is fairly close to some of the wettest temperate rainforests of the contiguous United States, the average rainfall is about the same as Los Angeles, California. Westerra Homes chose the beautiful setting of Sequim for it’s headquarters due to the climate anomaly often referred to as “the blue hole.” Fogs and cool breezes from the Juan de Fuca Strait make Sequim’s environment more humid than would be expected from the low average annual precipitation.

Sequim and its surrounding area are particularly known for the commercial cultivation of lavender, supported by the unique climate, making Sequim the ‘Lavender Capital of North America’, rivaled only in France.  Every year in July, Sequim hosts the Lavender Festival in beautiful downton.

Also known for its Dungeness crab, Sequim is a charming town of 6,600 residents and boasts a bustling downtown of local businesses and retail stores. Nearby, you can enjoy the unparalleled recreational opportunities of the million-acre Olympic National Park, or stunning Dungeness River Park and Dungeness Spit—the longest natural sand spit in the United States.

In Sequim, you are minutes from the breathtaking Dungeness River, Railroad Bridge Park and the Olympic Discovery Trail, an extensive trail system following the historic route of the Chicago, Milwaukee, St. Paul and Pacific Railroads.

Here you are surrounded with great recreation—from mountain trails and fishing streams to beaches and salmon boats on Puget Sound. In Sequim, you are just a short drive and ferry ride away from Seattle.  Kayak or parasail, play golf on our amazing golf courses, see the sights, or just relax with a swim and a workout at the nearby Aquatic Recreation Center. In Sequim, you are home.

A rain shadow is a dry area on the lee side of a mountainous area, away from the wind.  The mountains block the passage of rain-producing weather systems and thus, produces a ‘rain shadow.’

Sequim has been increasing in population dramatically in recent years due to the influx of retirees from the Puget Sound region and California.  Sequim is located along the Dungeness River.